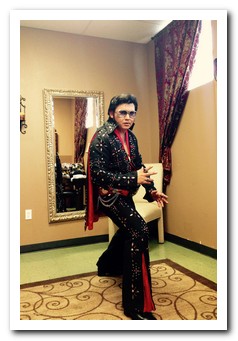 Travis as Elvis started when he was 14 years old. He asked his mother to make him a jumpsuit so he could dress like Elvis and the rest is history. Travis started doing Elvis shows just for fun and from there people kept asking him to do more shows and to sing more songs. Now Travis sings professionally all over Texas and has been known to be able to portray the Young Elvis as well as the Jumpsuit Elvis. Singing has always been his passion and he enjoys making everyone feel happy where ever he is at. Travis is from Guatemala and speaks spanish. He mainly grew up in Corpus Christi but he has been living in San Antonio for the last 8 years. He now resides in Cibolo and enjoys performing where ever he goes. He makes sure everyone is included at whatever occasion it may be. Where ever Travis goes, he is a friend to everyone.