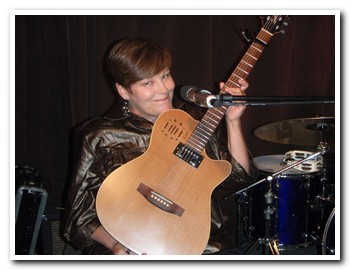 Susan Bach is originally from Brooklyn, New York and she hails from a musical family. Her paternal grandmother, Carrie Bach, played piano throughout NYC movie theaters during the Silent Movie era. Her maternal grandparents were born in Ireland, Joe & Mona Fox, and shared many traditional Irish songs with Susan and the family. Among the beautiful ballads she sings and performs on her acoustic guitar are “The Rare Auld Times”, “Carrickfergus”, “The Rising of the Moon”, “Fields of Athenry”. Susan also keeps the audience’s feet tapping with the lively “The Wild Colonial Boy”, “The Foggy Dew”, “The Wearing of the Green”, “Whisky In The Jar” and many more.

Susan recently appeared on WUSB 90.1 FM with DJ Eve. During the interview, Susan spoke of her music idols, including her mother and father, her song writing techniques and her life in the music business. Susan also performed many of her songs live. She has appeared on Wes Houston Presents on Cable TV Station QPTV. In addition to her solo career, Susan managers & also performs with her band, The Sue Bach Band. The music from her albums “In Mashes Sands” & “Going Down Breezy” are featured on iTunes. Her style of song writing range from environmental folk, rock, country to blues. Susan hopes that “people will hear my music as pure cascading water, where within, one’s spirit may rest and one’s heart can soar”. She soothes & rocks the house with her great guitar & beautiful voice. Her travels, with nature being a strong influence on her writing, have been many from the Atlantic Ocean in Queens to the Florida Keys & out west to California. The Florida’s Panhandle is where Susan wrote many of her most-loved songs, within a wildlife refuge and a national forest. She has the love of a pure child in her heart.